You are here: Home | RISK MANAGEMENT | How effective are our efforts to manage fatigue risk in aviation maintenance?

How effective are our efforts to manage fatigue risk in aviation maintenance? 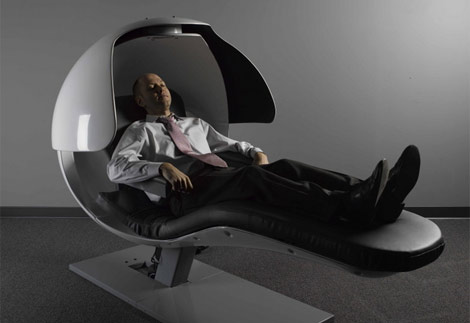 Seeing this sleep pod reminded me of the maintenance environment in aviation. Why is this not a thing in aviation yet? If there is any sector which needs this urgently it’s them!
Of course this pod is only an example of a possible solution of the widespread problem that is fatigue.

It personally rubs me the wrong way that in all the decades of human factors courses where we tell maintenance engineers about the danger of fatigue, few constructive steps are taken to manage fatigue.

It is also emblematic for the core problem of Safety risk management in aviation so far; risks are being talked about and people are told to watch out, but there are few structural steps taken to actually reduce these risks.

In the case of fatigue, it might surprise you to know that there is one sure, bulletproof way to reduce fatigue almost instantly and increase human performance dramatically… sleep.
From www.Webmd.com

For those who are wondering about micro-sleeps  Wikipedia: A microsleep (MS) is a temporary episode of sleep which may last for a fraction of a second or up to 30 seconds where an individual fails to respond to some arbitrary sensory input and becomes unconscious.
Basically it means you can’t stop your body from shutting down if it decides it is too tired to function!
If it is fatigued your brain just stops working without warning!

One of the biggest problems around this theme is that the fatigued individual is the person least able to judge his or her own performance.
Sabena did very interesting experiments in the 90’s in the with pilots’ brains wired up during actual intercontinental flights. The pilots swore they were awake all the time, but the instrumentation demonstrated their brains were medically sleeping multiple instances on the job during final approach (of course only microsleeps as Mark Rosekind describes).

Being fatigued is compared as having a similar impact on human performance as being legally drunk.
Remember your drunk mate’s insistence he is fine to drive?
Well, your fatigued engineer, who is working night shift # 5 and just had a lousy rest due to constuction next door, has about the same level of performance. We don’t hesitate to let him or her perform critical maintenance tasks on our million dollar aircraft which is about to take off with dozens or hundreds of passengers.

Where is the outrage about fatigue then?
It seems a lot of organisations are simply burying their head in the sand about the issue. Beyond the HF course we give engineers every 2 years where they are told in serious tones that fatigue might increase the chance that they make a human error (no shit…, ever worked a night shift roster?), not much else is done to help them reduce fatigue.

In most cases fatigue is left totally up to the individual to manage,
In aviation we still insist that our maintenance staff work uninterrupted (without official naps that is) through the night.

One of the standard weapons to combat fatigue is heavy use of caffeine and other stimulants. Remember that caffeine has a half life of about 12 hours, so you will still feel the effects when you want to sleep.
This long-term heavy use can disrupt sleeping patterns even more and lead to a vicious cycle of lesser quality rest which only worsens the problem for the next shift. 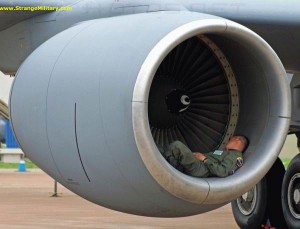 When things really get out of hand most people will have a quick emergency nap, wherever possible (toilets, desks, loud crew rooms, engine cowlings, cargo holds) but it’s clear that these are sub-optimal circumstances and are not as effective as they could be.

In theory, if you really are too fatigued, yes you can put yourself as not fit for duty due to medical reasons.
But there are powerful disincentives that keep people from doing so (financial, peer pressure, not wanting to let the team down,… ). Added to which, given that fatigued individuals have lousy self awareness about their performance levels they will most likely will soldier on…

Examples abound where aircraft overshot their planned destination because both pilots were asleep, the problem in these cases is not that the pilots sleep in flight as such, rather that they sleep in a poorly managed circumstance which allowed the situation where both fell a sleep.
A controlled nap with a 3rd person in the flightdeck as described above can do wonders for restoring performance, but napping wrong (e.g. too long, interrupting REM cycle etc) can leave you feeling worse off due to sleep inertia !

Companies like Google and the like are starting to catch on that it is not the number of hours that staff work which impacts productivity but their performance during those hours. Things like the energy pod shown above are becoming the norm in these companies. They allow a strategy of controlled naps (high quality rest, limited to optimal duration) which has remarkable benefits to restore levels of cognitive performance.

For ground staff, solutions like these sleep pods in combination with wearables to monitor performance on an on-going basis can help people to have a high quality rest for the optimum time, while avoiding the problem of sleep inertia.

The main obstacle will be the perception about sleep in the organisation. In environments where there is a lack of trust in staff, organisations will fear abuse, and think staff will “steal” company time by sleeping. The argument that staff should sleep in their off time and are responsible to show up rested has merit to some extent, but the industry has to recognise that real life circumstances can conspire to staff being excessively fatigued.
Staff which work while excessively fatigued are in fact exposing the organisation to unacceptable levels of risk of human error. We don’t accept staff working while drunk, we shouldn’t allow them to work while excessively fatigued! The good news is that unlike people under influence, fatigued individuals can be helped immediately!

Managing fatigue through napping is one of the sanest actions we can take to maintain acceptable levels of performance. Investment in tools and an environment to monitor and restore human performance should be a no-brainer!

The advent of new wearable sensor technology like Fitbit® and phone application should allow to help individuals monitor their performance constantly and help them to come up with individually optimized strategies to combat or avoid deep chronic fatigue.

In some organisations there is already a serious shortfall in qualified engineering staff which leads to a lot of overtime and very long rosters for the people that remain. Added to this, is the squeeze on salaries, poaching etc.

I have several peers who started out as aviation engineers but who gave up on it because they could make the same money as an internet cable installer and stop doing night work, basically they were tired of being tired all the time.
Quality of worklife is going to be a major factor in retaining qualified staff, besides the performance aspect, managing fatigue effectively is going to be critical to retain and attract qualified maintenance staff.

In Scandinavia I have seen forward thinking organisations that installed fully equipped gyms and massage services for staff. (mainly to combat back issues due to the hopeless ergonomics of the cockpit seat in long-range helicopters). It is at least a positive step to try to improve human performance and manage the risks caused by chronic issues.

To reduce the risk of fatigue-caused human error, the industry will need to step up and actually do something by creating an environment and tools which allow their staff to maintain optimal levels of human performance.

Of course the individual has a large responsiblity. But they can be helped enourmously if they are backed by an organisation who helps to educate its staff and provides modern tools  to detect the fatigue risk and effectively restore human performance to acceptable level.

Jan Peeters
Jan is an experienced Safety practitioner who is always on the lookout to improve SMS and the management of safety. He coaches organisations and individuals in Safety Management.

MORE THINKING MATERIAL TO YOUR E-MAIL

Get more safety thinking in your e-mail